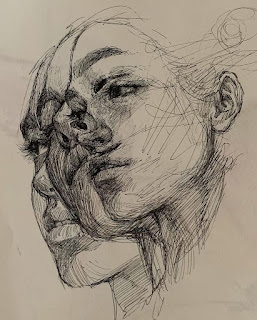 What’s that word again? Blurred memories, I keep on forgetting that word, besides the point.

Murmurs heard from proximity, and it surrounds me, yet, I can’t figure out a single thing they said. Imagine being a part of a community that deflects your presence when they don’t need you but comes sprinting to you as if it was a marathon when they do. I genuinely wish that this is not my substance, but it is. I am fortunate enough to have a few friends that made me feel like I was accepted. If it isn’t for them, I would be lost right now.

Loneliness is a feeling that’s so constant in my world. Either way, it’s just a feeling I’m bound to feel, with or without the presence of another. The unusual thing that many people find ominous is that many people surround me, yet I’m constantly feeling restrained. They don’t get the number of things that go on.

Sometimes I wish I lived in tranquillity, with zero noises around, but hoping how things should be different wouldn’t change how things are. Lately, things are going just fine, mainly because I feel numb. I’ve been getting invited into multiple gatherings. I don’t even know why they ask me; it’s not like they actually try to include me in their conversations anyway. I decided to come to every gathering nevertheless just because I don’t have a life. Really though, all I do is binge-watch shows, skip meals, and read. They often told me to sit on the middle couch with all of them; sometimes, I would sit there, but most of the time, I prefer to sit on the sofa placed in the left corner of the room. Whenever I’m in these gatherings, I always get that drowning feeling, anxiety covering 90 percent of my body; I try to act normal, but sometimes fear trickled through my eyes. Even if I show how I truly feel, no one pays attention to them; I’m just an accomplice. There was this one time where we were playing a game of truth or dare, and it was my turn; I picked truth automatically, too anxious to say dare. They asked when was the last time I cried. I gulped and answered, “last night after my parents started an argument with me.” Judicious eyes started to besiege me. Do they think I’m overly emotional for crying over an argument? Do they think I should just forget about last night’s melodrama? They just smiled at me for one second, but somehow one second felt like an eternity. Some of them started to whisper to the person next to them. Even when they all smiled, I knew something wasn’t right; I knew that they’re sentencing me for it.

I will never know what’s genuine and fraudulent, will I? terror got the best of me, I thought I could stand above what’s beneath me, but my overthinking self can’t help it. I am one frail being. After all this, it hit me. The word I was looking for. Outsider. A person who does not belong to a selective group of people. I am that person. I guess I’ll just have to deal with the untold truth.